Why are Das Keyboards so damn good?

Das Keyboards are the BMW of the keyboard market. They are brought to us by the Metadot Corporation, and are a prime example of high end, robust, value for money German engineering. I’d be very surprised if they do not last through a lifetime of typing out emails, letters, essays and search queries! Das claims that its keyboards are designed to withstand 50 million key strokes, and you know what? I believe them!

Although these keyboards will cost you a fair few dollars, it’s well worth the money when you consider typing speed, comfort, and the satisfaction you get from using a tool with superior build quality. When you are talking about the best keyboards, it’s rare that such a conversation would ever be lacking a mention of Das.

They are built really really well (what you’d expect of a German brand) and they actually feel like you could jump up and down on it with a big pair of Timberlands and then put it back on your desk and start typing again. It’s what impresses me the most about high-performance Das Keyboards.

Made from a really slick looking slab of aluminium, Das Keyboards is the thinnest mechanical keyboard on the market today, which is no surprise when you look at it side on. It’s about an inch thick, which doesn’t sound that thin when you compare it to other devices that are out there like the Apple Mac keyboards, ipads, tablets etc, but compared to other brands of mechanical keyboards, they are the thinnest by far! The Kate Moss of keyboards. You need one of these computer keyboards on your wish list!

Best Das Keyboards On The Market:

2005 was the year that Daniel Guermeur set upon the quest to become faster and mor accurate in his own typing abilities. To do this he managed to get himself a completely blank keyboard, with no characters on it at all. After using the keyboard for just a few weeks, he was astonished to discover that his typing speed had doubled. After showing it to friends and colleagues, who also set about testing the keyboard, were also amazed by the improvement in their own typing skills, wanted one.

Daniel found a business opportunity with real potential. That was when he created Das Keyboards. From the initial concept, the keyboard then went on to be developed into the master stroke of engineering it is today, with precision and individually weighted keys and a solid aluminium chassis. Techno-elitists loved it as it gave them a way to differentiate themselves from other so called “techie” mortals. It’s also a big seller within the education sector as schools and universities looked for more effective ways to teach typing.

Who Are Das Keyboards Good For?

Das Keyboards are great for computer novices who want to learn how to type or for people who want to improve speed and accuracy of their typing. As I’ve mentioned before, the Dad Keyboard range is strong and robust, and is ideal for people who use their keyboards a lot!

The Best Das Keyboards On The Market

There are 11 Das Keyboard models out on the market and we have reviewed every single one of them. Please feel free to read the quick reviews below. If you want to read more on each on, click through to the extended review.

While all based on the same model, each of these has slight differences that sets them all apart from each other. Before we get to the differences of each let’s look at the features they all have in common: 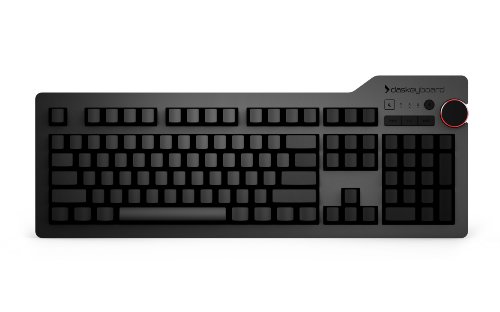 I’ve tried this keyboard out and although it’s quite weird not knowing what you are pressing until you see it on the screen, you do actually get used to it and find that you no longer look at the keyboard when you are typing!

In addition to the blank keyboard, the Ultimate model uses soft-tactile Cherry MX Brown switches. It also comes with a USB 3.0 Super speed hub and full n-key rollover with anti-ghosting.

Related Buying Guides: Have a read of our guide on the best mechanical keyboards for typing 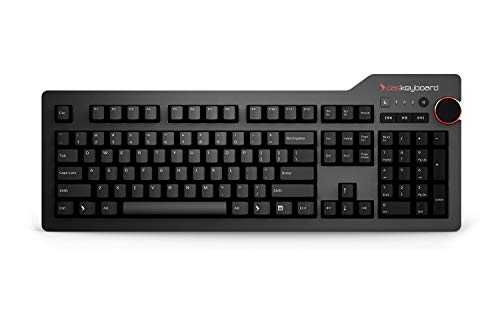 The Das Keyboard 4 Professional mechanical keyboard shares most of the same features as the Das Keyboard 4 Ultimate, but one definitive features that separates them, is that the Das 4 Pro has laser etched keycap inscriptions. There are bumps on the F and J keys, so that you can align your fingers to the QWERTY keyboard with touch alone, rather than sight. Other than this, most of the features are the same.

The Das Keyboard Professional For Mac, again shares most of the same key features as it’s siblings in the range, but with a couple of significant differences. First, the Das 4 Pro For Mac is designed specifically around the Apple Mac OS, and Mac key functions.

The other significant difference with keyboard is that is uses clicky Cherry MX Blue switches for the best typing experience. As it used blue switches this is more suited to typing rather than gaming, but will ultimately work well for both. 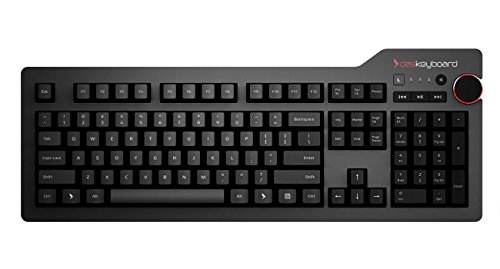 The Das 4 Root, is a minimalistic version of the Das Keyboard 4. It is designed around the 4 Pro, but with a couple of differences. First, it sports a USB 2.0 hub rather than USB 3.0. It also has an extra long braided cable. The Root also used Cherry MX Brown switches like the others in the range (with exception to the Pro for Mac) and dedicated media controls.

The Das Keyboard Model S is an older version of Das Keyboard, first available around 2010. The Das 4 is largely based on the Model S. But while a lot of technology in today’s ‘throw away society’ is not built to last, the Das Model S is a prime example of technological longevity. German technology at its finest!

As with the Das 4 Keyboard series, the Model S series shares a host of features across each of the models in the series. These common features include:

Other Keyboard guides you should check out..

Thanks to the compact design of this keyboard, you can now play all of the hottest games when you don’t have a lot of space. The 4C includes both standard keys and programmable keys but gets rid of the numeric keypad to reduce its footprint. Cherry MX Brown switches respond quickly and let you jump across different keys or press combos to execute attacks without missing a beat. Capable of lasting for up to 50 million strokes, the keyboard has a built-in USB 2.0 hub. You can now charge any of your wireless devices at the same time that you play thanks to that port.

With its far superior and satisfying typing experience, comes the nosy buttons and huge clunky appearance. It’s very much like using an old fashioned IBM keyboard with its tactile buttons and loud typing noise from the Cherry MX Brown Switches. But with its many old school features comes a keyboard that is truly a joy to use and has some very modern features like media-control keys and a dual USB port, as well as anti-ghosting.

Yes it’s minimal in all aspects on design and functionality, but the Das S Professional is like a fine wine. A typing connoisseur would love this keyboard, due to the action of the buttons and the fact that each key is like a lovely comfy armchair for your finger tips. 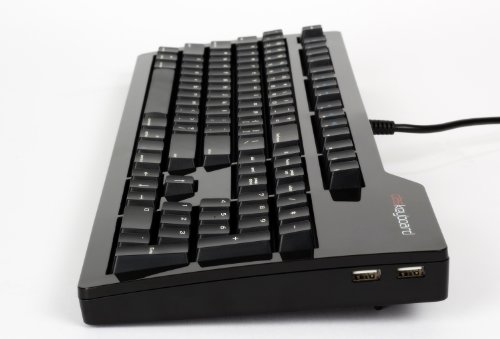 The Das Model S Professional For Mac is similar to the Model S Pro in many ways, but with a few stand out features:

As with the Model S Pro, the keys are laser etched with bumps for the f and j key. The keys are incredibly soft, comfortable and great for those long sessions at the screen.

The Das Smart RGB Keyboards come in a variety of unique and defining models:

Each of these keyboards is different but with a few common features and ‘smart’ features that include:

Beyond these common features, each of these Das Smart RGB keyboards has a stack of their own unique features that make them outstanding in the area they are designed for. 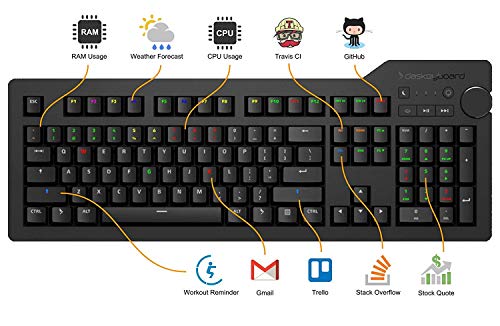 The Das Keyboard 4Q is the Smart version of the outstanding Das Keyobard 4 model. As well as all the standard features you get with the Das Keyboard 4, the 4Q also brings you a host of features tailored to making your experience ‘fluid’ and user friendly. The smart features here are not just ‘nice to have’, they are game changing. The power of the Q software and notifications add layers of value previously unavailable.

For a programmer for instance, say one of your website’s goes down, or there is a server fault or work flow you want to track. The Q software will replace the reliance on snooz-able apps, by providing you the ability to customize your own ambient tracking through the RGB keys. You can define your own needs, and the keyboard will use different RGB backlit colors to feed you information directly. The ability to customize and define functions to your own needs and specification is outstanding. 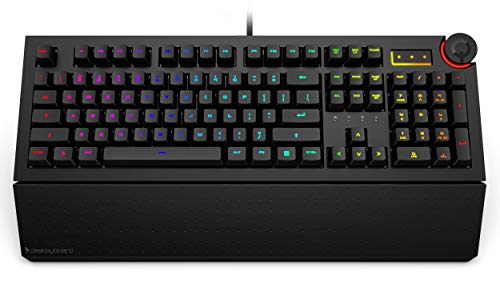 The Das Keyboard 5Q has many shared features with the 4Q with a few notable and significant differences. This one is tailored greatly for developers, reducing interruption through the ability to customize and track your own notifications on your own terms. The pre-built Q Applets open doors to information from apps without you having to keep flicking pages, tabs or annoying pop-ups diverting your attention. As the API is opensource, you can also write your own personalized apps to use yourself or share. This keyboard is a developers dream. There are other notable differences between the 5Q and the other Das Smart Keyboards, including: 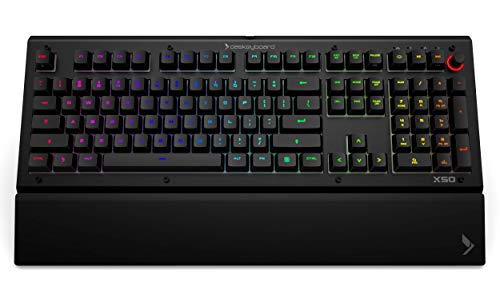 The Das Keyboard X50Q is predominantly a great gaming keyboard. Voted the best work/play all rounder by Mashable and it is easy to see why. It is ergonomically sound, powerfully backlit and intelligently designed. While sharing the same smart features mentioned above, including Q software and applets, there are, again, some X50Q specific features that make this keyboard stand out in the crowd. These include: 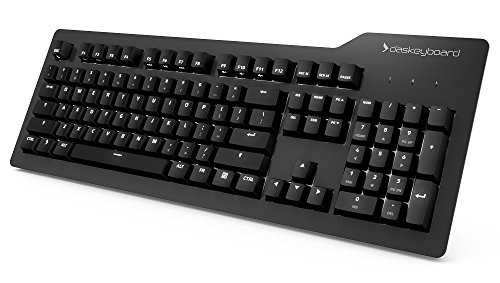 The Das Keyboard Prime 13 White LED Keyboard looks a bit like a Das Keyboard Model S, in the absence of the oversized volume knob at the familiar place at the top right of the keyboard. The shape is similar, but as the gloss-less chassis would suggest, that is about where the similarities end. The Das Keyboard Prime has it’s own rich identity, and it’s own set of charismatic, energy-efficient features. The obvious difference, is that the backlighting is a fixed white, rather than RGB. Like the Das Keyboard 4, the Prime keyboard has a anodized aluminum top panel. While it may look more like the Model S, the features within are much more like the Keyboard 4.

In terms of energy efficiency, the Das Keyboard Prime 13 has the following features:

Other significant features of this model include: